One Word Sums Up New York's Weather in August 2019: 'Uninspiring'
A Reading in the 90s Makes October 2019 Memorable in New York

September 2019 - One of 10 Driest Septembers On Record

September 2019 was the first month since October 2013 to have less than an inch of rain and was the eighth driest September on record (0.95" was measured).  Thru 9/20 the month had average temperatures, then the last ten days were eight degrees warmer than average, resulting in the month being 2.4 degrees above average (24th warmest since 1869).  Although it was warmer than average, the month had just one low of 70º+, the fewest in September in ten years (there were none in 2009).  It was also the first September since 2011 not to have any highs of 90° or hotter.

This September added to the record set last year when September 2018 was the fourth in a row with an average temperature of 70.0 degrees or warmer.  September 2019, however, was the "coolest" of the five.  However, a record that was tied last September, the sixth September in a row with a high in the 90s, wasn't broken this year as the hottest temperature this was 89°.  (It occurred on 9/23 - the same date as the month's only low in the 70s).

Two-thirds of September's paltry amount of rain fell in the first six days of the month, split mostly between Labor Day (when 0.30" fell mid-day, the most to fall on the holiday in sixteen years) and 9/6, when the most northernmost band of hurricane Dorian dropped 0.27" in less than an hour during mid-afternoon. 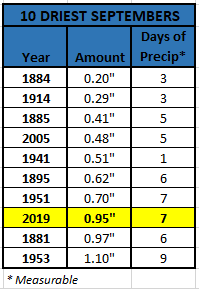 Finally, humidity of 15% or lower occurs very infrequently in New York, and when it has happened it's been confined to March and April (in the years since 2000) - until 9/19, when it dropped to 15% for a few hours that afternoon.  The last time the humidity was this low in September was on Sept. 11, 2001, when it bottomed out at 16%.

Here are recaps of the five previous Septembers: 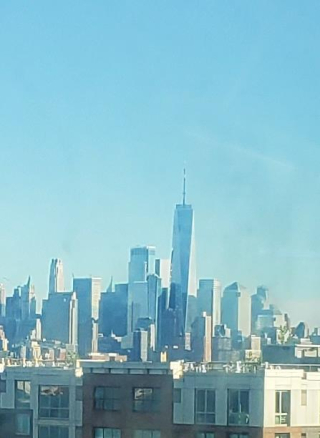