December 2019 was the wettest month of the year and fifth wettest December on record (7.09" was measured).  Much of its precipitation fell in the first two weeks of the month.  In fact, the 5.05" that was measured during this period was the third greatest amount to fall in the first two weeks of any December.   Looking at temperature, the month was slightly above average (+0.8°).  Although Dec. 1-22 was 2.5 degrees colder than average, the rest of the month was mild enough (+9 degrees), to push the entire month into the above average column.  The mildest reading of the month was 58° (on 12/10), making this the first December since 2005 not to have any readings of 60° or warmer.  The coldest reading, 16° on 12/19, was three degrees colder than the typical coldest reading of December.  The 19th was also the only day that had a high of 32° or colder (25°).

Despite the month's surplus precipitation there were ten consecutive days with no measurable precipitation (Dec. 19-28).  This matched a 10-day stretch in September - the longest dry spells of the year.  (September 2019 had just 0.95" of rain, making it the eighth driest September on record).  Coincidentally, last year's wet December (ninth wettest) also had a ten-day stretch with no precipitation.

Being the wettest month of a year is rare for December.  Before 2019 only two other years had December as their wettest month - in 1957 (when 5.26" was reported) and in 1973 (9.98" was measured).  Another distinction for Dec. 2019 is that it was just the 13th month to have more than seven inches of rain as well as a streak of 10 or more days without any measurable precipitation.  (The longest streak during one of these months was thirteen days in June 2006). 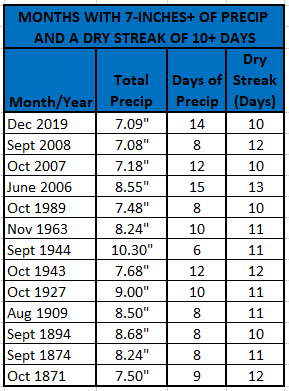 In addition to the soggy first two weeks, other December highlights included the season's first measurable snowfall on 12/2 (1.3" fell) and an out of the ordinary snow squall of 10-15 minutes during the afternoon of 12/18 that ushered in the coldest weather of December (0.4" accumulated, and an additional 0.3" fell from a snow shower a few hours later).  Additionally, the first four days of the month had highs/lows stuck in the 30s, just the sixth time there's been a streak of this length or longer. 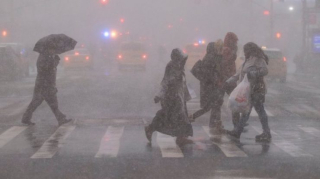 Since the month had seven days with highs and lows in the thirties, did this set a record (or at least get close to a record) for the December with the smallest diurnal variation in temperature?