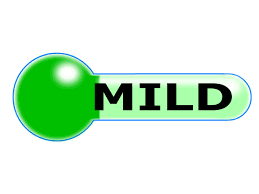 January 2020 was the 11th mildest January on record (6.4 degrees above average).  Only six days had below average temperatures; just one had a high of 32° or colder, joining 10 other years with either no such days or one.  The month's highlight was the May-like temperatures during the second weekend of the month when record-setting highs of 69° and 68° were reached.  The coldest reading was 20°, which happened on three days (January's coldest temperature is typically around 9°).  Looking at precipitation, this was the driest January since 2002, with a little less than two inches measured (half the typical amount).  As for snowfall, only 2.3" was measured (but double last January's total).

A typical January is five degrees colder than December, but January 2020 was 0.8 degrees warmer - the 31st time January has been milder than December; the previous time it happened was during the winter of 2006.  Besides being slightly milder than December, its snowfall was a touch less as well (2.3" vs. 2.5").  Although the month had a minimal amount of snow, there have been 36 Januarys with smaller amounts. 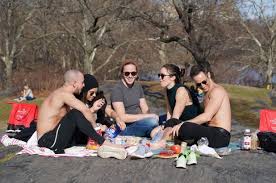 Basking in the springlike temperatures of Jan. 11 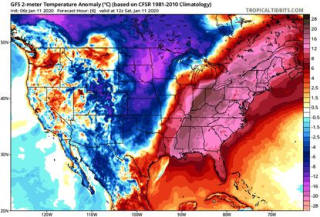 Temperature map during the very mild weekend of Jan. 11-12

A streak of six days in a row with mean temperatures ten degrees or more above average (Jan. 10-15) was closely followed by six consecutive days with lows in the 20s (Jan. 17-22).  Although this was far from frigid, it equaled last winter's longest streak with lows colder than 30°.

January continued the pattern of one month wet, the next month dry, a trend that started in September.

Here are analyses of the previous six Januarys: