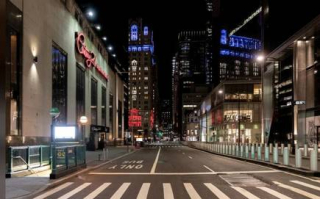 March 2020 was 5.5 degrees milder than average, becoming the eighth mildest March on record.  By coincidence, this  followed an eighth place ranking for February 2020.  Only one day had a low of 32° or colder (a typical March has twelve such days), occurring on the first day of the month when the mercury fell to 25°.  The month's warmest reading was 77° on 3/20.  For the third month in a row precipitation was below average, but the 3.78" that was measured was the most of the three months.  The year's rainiest and second rainiest days, so far, occurred on March 23 (1.19") and March 19 (0.93").  Like February, just a trace of snow was reported, only the second winter in which this occurred (the other winter was in 2002). 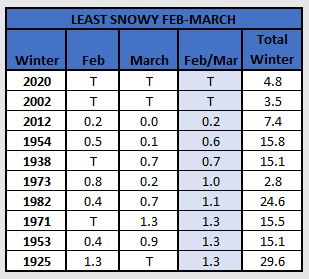 Jan-Feb-Mar combined this year had 2.3” of snow (all of which fell in January). this was the least snowiest Jan-Feb-Mar combo ever, breaking the previous record from 1973 by 0.5”. by comparison, fourteen winters since 2000 have measured at least 20” of snow in these three months combined. this joined 1903 as the only two Marches in which every day but one had a high of 44° or warmer. this joined 1942 as the only two Marches with one or zero days to have a reading of 32° or colder. 3.78” of rain fell this month, just 0.09” fewer than the amount of rain that fell last March. the Marches of 2017 (5.25”) and 2018 (5.17”) were also very close in the amount of rain they had as well. at 42.5°, this was the second warmest Jan-Feb-Mar combination ever, second only to 2012, which was 0.6° warmer. Lastly, this was the second March in a row where the warmest reading happened on the third Friday of the month.

As far the least snowiest winters had did this winter rank?

If April has no days with lows of 32 or below (or May, but May has had a low of 32 just once, in 1891), this will be the 2nd earliest "last low temp of 32 or colder" ever, in that it happened on March 1. The record was set in 1942 when it happened on February 28 (I believe that March was also the only one not to have a low temp of 32 or colder, but I could be wrong as there may be one or more that did only to have such a low temp in April).

this entire season had just three days with a low in the teens or colder (one in December and two in February), the second fewest of any season on record, one fewer than the 1998 season and one more than the 2002 season. an average season sees about fifteen to twenty such days. just five years earlier (winter of 2015), the season had 34 such days, the most since the 1978 season, which also had 34 such days.

There a typo on the "10 mildest marches" chart, but it's the NWS's fault not yours. 1903 shows as being colder than 2020 even though it shows a milder average high AND low. I looked it up and the average temp for March 1903 is actually 48.2, tied with 2010. On the NWS NY City website, it mistakenly shows the 47.8 figure in the "top 10 March" list, but the NWS NOWdata section when you look there shows the same average high and low that you show for March 1903, but correctly shows the average temperature as 48.2

the winter of 2019-2020 had no instance whatsoever of consecutive days with a high of 32° or colder. when was the last winter to have this distinction?

The previous four springs in a row are noteworthy for a pattern; each of these springs contained two months that were cooler than average and one month that stood out as exceptionally warm.

In 2017, both March and May were cooler than average; but April 2017 became the 2nd warmest April on record.

In 2018, both March and April were cooler than average; but May 2018 became the 6th warmest May on record.

In 2019, both March and May were cooler than average; but April 2019 became the 13th warmest April on record.

In 2020, both April and May were cooler than average; but March 2020 became the 8th warmest March on record.