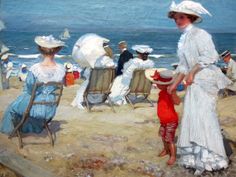 March 16 - The day after a five-inch snowfall, today saw an onslaught of freezing rain.  0.89" of liquid precipitation fell in temperatures that were mostly at freezing or colder (the day's high/low was 33°/22°).

July 4 - Today's high was 91°, making this the third year in a row with a high in the 90s on the 4th of July - the longest such streak for this holiday. 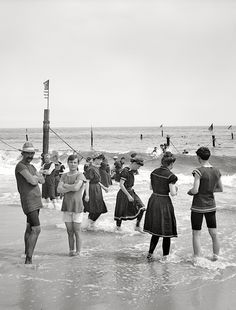 September 6 - Today was the 21st day this year with a high in the 90s, twice the average number.  The next time there were this many hot days wouldn't be until 1929.

March 21 - Although today's high was just 53°, it was the mildest temperature in March and would be the chilliest reading to be the warmest of any March in the 20th century (a distinction that has continued in the 21st century).

June 23 - This month's paltry 1.00" of rain (today was the last day with rain) was sandwiched between four months that each had more than six inches (April, May, July and August).

July 2 - For the second day in a row the high reached 100°, the first time on record there were back-to-back days in the triple digits.  It would be 25 years before this happened again.  (Since then, there have been seventeen occasions with consecutive days, or more, with triple digit readings, with the last time being in 2011). 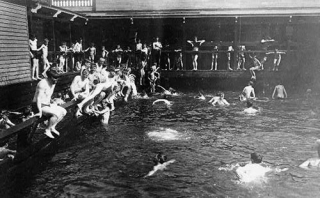 November 28 - Today would have been quite cold even by the standards of mid-winter as the high/low was only 26°/19°, making this the coldest Thanksgiving Day of the 20th century (based on mean temperature).

December 15 - After mild temperatures in the overnight hours, and a hard rain in the morning that amounted to 1.16", the temperature plummeted from 60° to 22 °.

January 1 - This morning's low of 13° was the coldest reading of the winter - the first winter since 1871 not to have any lows in the single digits or colder.  A typical winter's coldest reading in this era was typically around 2° or 3° above zero.

September 2 - Today, with a high of 82°, was the last day to report a high in the 80s (or warmer) this year - the earliest date for this occurrence (a mark that still stands).  Typically, the last 80+ reading is during the last week of September.

November 29 - Today's low of 34° was the coldest reading of the month, making this the first November whose coldest low wasn't 32° or colder.  (A typical November between 1870 and 1900 averaged eight such lows.)

February 16-17 - A snowfall of 9.5" was the biggest accumulation of the winter - and occurred on the same date as the previous winter's biggest snowfall (10").

June 24 - This was the sixteenth day of the past eighteen to have measurable rain.  Nearly seven inches fell during this period, coming after a 15-day stretch with no rain (and just 0.30" fell in the prior seven-and-a-half weeks).  During these wet days there was also an eight-day streak (6/13-20) in which highs were only in the 60s (highs are typically in the upper 70s).

September 16 - A category 1 hurricane made landfall on the Jersey shore in the morning and brought a brief period of heavy rain to New York between 11 AM-2 PM, with 1.63" measured.

October 8-9 - A stalled hurricane (that weakened to tropical storm status), and a low-pressure system that formed along an approaching cold front, combined to create a tremendous rainstorm that produced 11.63" over 26 hours.  The deluge started late in the morning of the 8th (4.30" was measured) and continued thru mid-afternoon on the 9th (when 7.33" fell).  Rain fell at a rate of an inch every two hours for a large portion of the storm; at its most intense, 2.54" fell from 9-11 AM on the 9th.  At the time the rainfall on the storm's second day was New York's second greatest daily amount (behind Sept. 23, 1882's 8.28"); it's now ranked fourth.

January 6 - Ten of the past eleven days had highs of 32° or colder.  The average high/low during this time was 25°/13°.  Yesterday had the coldest reading, -4° (the only sub-zero reading of the decade).  And Jan. 2 had eight inches of snow (2.3" of snow accumulated from two other snowfalls in late December).

February 9-19 - One month after an extended cold wave, another one of identical length moved in.  Ten of the eleven days had highs of 32° or colder.  The average high/low during these days was 25°/11°, twelve degrees colder than average.  The coldest reading during this period was 2° on Feb. 16, and two snowfalls produced five inches of snow. 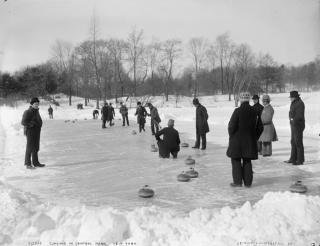 September 14-15 - After three weeks in which just 0.01" of rain fell, 3.84" poured down from a hurricane that crossed the eastern end of Long Island and tore 19 barges from their moorings in New York Harbor.  The rain was split pretty evenly between the evening of 9/14 and the following morning. 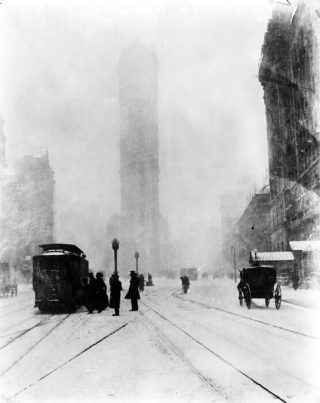 December 22 - This was the last day of a two-week period with unseasonably cold weather.  The average high/low of 32°/21° was ten degrees below average.  Eight of the days had highs that were 32° or colder.

January 1 - With a high/low of 53°/42°, this was the first time since 1889 that New Year's Day was completely above freezing.  And the day's high would be the warmest for eleven weeks (thru March 18).

January 25 - Steady snow that began last night continued until 9 PM tonight and accumulated 11 inches, the biggest snowfall since the blizzard of February 1899.  Temperatures fell from the mid-twenties in the early morning to low teens by the time the last flakes fell.  This was the fourth snowstorm of six inches or more since mid-December. 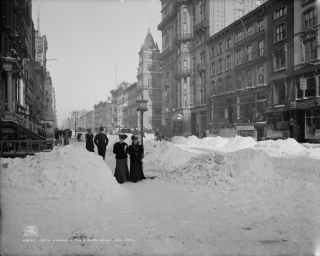 February 21 - Today, with a high/low of 41°/33°, was the mildest day of the month (and the only day with a low above freezing).  Not surprisingly, this would be the third coldest February on record (it's since fallen to fifth).

September 18 - Today's high/low of 77°/72° was the tenth time this summer temperatures were stuck in the 70s for the entire day - the most of any year (a record that still stands).

October 20 - Six of the past seven days had highs in the 70s (warmest reading was 77°) at a time of year when the average high is in the low 60s.  And four of the days had lows in the 60s (warmest was 68° on the 19th, a record that still stands).  Cooler air moved in later today after the exit of a coastal storm that produced 2.33" of rain between last night and noon today.

November 28 - The first significant rain in the past 38 days fell today, a period when just 0.20" was measured.  0.56" fell during the PM hours and continued into the following day, with an additional 1.01" measured.

January 4 - For the second year in a row the first reading in the 60s fell on this date, more than two months earlier than the typical date (March 11).  The day's high in both years was 60°.  (At the time only 1876 had an earlier date for a reading in the 60s; since then, nine years have had first 60s on one of the first three days of January.)

February 5 - Since Jan. 17, 26" of snow accumulated from seven days with measurable snow.  Nearly half, 11", fell today.  And nearly the same amount would fall in the next two months (thru 4/9).

April 9 - Today's five-inch snowfall was the seventh of four inches or more in the past three months.

November 10 - Today's high of 61° was the relatively chilly mildest reading of the month - and there wouldn't be another reading in the 60s until March 26.

December 31 - On the night of the first ball-drop in Times Square, the temperature was in the mid-30s under fair skies. 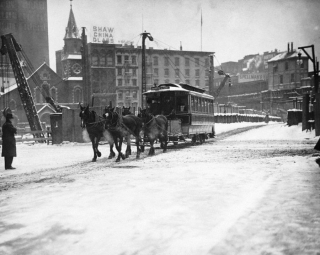 July 7 - This morning's low was a stifling 84°, close to the average high in mid-July, and the warmest low reading on record.  Another 84° low would occur in mid-August.  It would then be another 87 years before this reading was reached again (and once more in 2011).  Despite such a warm start, the highs on both days this summer reached just 93°.

October 16 - Today's high of 80° came five weeks and one day after the previous reading in the 80s (Sept. 11).  If that September date had remained as the year's last 80+ temperature it would have been one of the earliest on record for this occurrence.  (1902 holds the record, Sept. 2.)

October 27 - For the fourth day in row lows were in the mid-to-upper 60s, about twenty degrees above average, and warmer than the typical high during this time of year (61°).  Two of the days had record-high lows which are still standing (69° on the 25th, 66° on the 27th).

November 18 - The 0.05" of rain that fell today was the last measurable precipitation of the month.  In total, just 0.71" fell, tying Nov. 1890 as the driest November on record (they've since fallen to third).  This followed a dry October and September, in which just 1.38" and 1.91" of rain fell, respectively.  The four inches of rain that was measured made this the driest fall on record (and the following year would be the second driest).  It would be two-and-a-half weeks before the next measurable precipitation fell (on 12/6).

August 16 - 4.80" of rain fell, but it wasn't from a tropical system.  At the time, this rainfall was tied for third greatest daily amount (it's now tied for 13th).  Rain on this rainy Monday fell heaviest between 10 AM and 9 PM.

August 21 - After 8.50" of rain had fallen in the first twenty days of the month, there would be no measurable rainfall for the next 15 days.

December 13 - A nor'easter produced 3.03" of rain (and an inch of snow at the onset), a record amount for the date, and the most to fall in one day in the month of December (3.25" fell for the entirety of the storm).  Rain fell throughout the day, but significant amounts fell after 11 AM; more than half of the rain fell between 7-11 PM.

December 25 - Snow began falling mid-afternoon and by midnight seven inches had accumulated (an additional inch fell after midnight).  After 10 PM winds gusted to 30 mph.  This snowfall exceeded the Christmas Day snowfall of 1902 by half an inch to become the snowiest Christmas on record (which still stands). 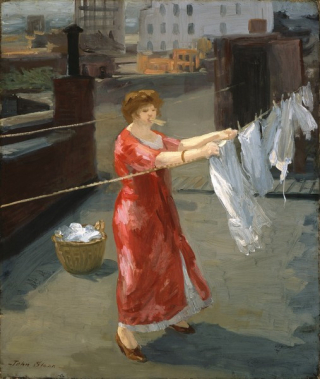 To read about weather highlights in other decades: