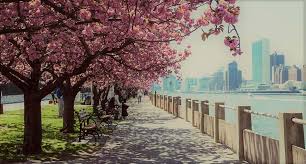 April 2021 featured ten days with highs of 70° or warmer, the first time April reported this many since 2010, and just the tenth time overall.   (The average number of such days in April is six.)  This above average number of warm days resulted in the month's average high being 2.5 degrees milder than average (its average low was 0.7 degrees above average).  Of the ten Aprils with ten or more highs of 70° or warmer, just four rank among the ten mildest Aprils.  This April ranked 22nd (out of 153). 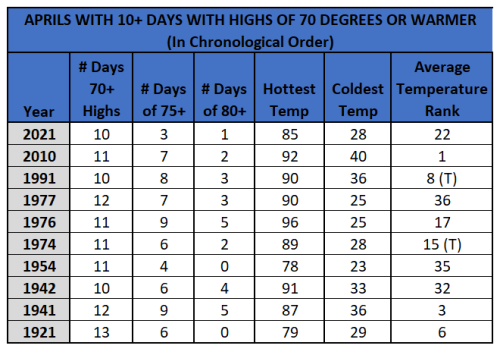 Another highlight of the month occurred on 4/8 when the humidity dropped to 7% during the afternoon - the second lowest level this century.  Finally, April's rainfall of 2.69" was nearly two inches below average.  All but 0.05" fell between 4/11 and 4/30.

Here are April recaps of the past five years:

I would like to label the week of April 4-10 as the “perfect week” because every day of the week had an abundance of beautiful blue skies and warm temperatures. If every day of a week has clear skies and warmer than average temperatures, it is a true blessing whenever it happens. The warm weather during the last third of March and the first week of April contributed to an early bloom on the trees.

If May has warmer than average weather, then this will be the sixth spring this century so far in which all three months (March, April, May) were above average. The springs this century that have met this condition are 2004, 2006, 2010, 2012, and 2016.