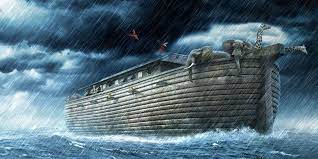 Besides being rainy, this was the coolest July since 2009 (and 0.1 degree cooler than July 2014).  When all Julys are considered, July 2021 is in the middle of the pack, temperature-wise, with 54% being warmer.  The combination of a warmer than average June (+2.3 degrees), and July being 1.5 degrees cooler than average, placed these two months closer together (1.7 degrees) than any June/July combo since the summer of 2001 (when July was just 0.3 degree warmer).  Looking at average high and low, July's average high of 83.0 was just 0.5 degree warmer than June's, while the low of 69.0 was 3.0 degrees milder.  Because many days had dew points in the 68°-73° range, the air often felt oppressive rather than cool. 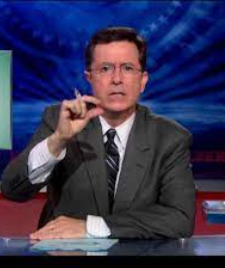 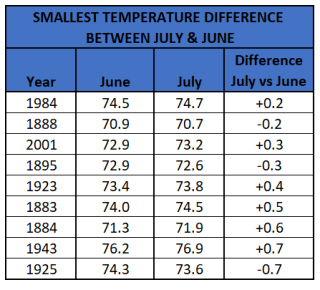 July had 8.47" more rain than June's 2.62", but there have been ten other instances where the disparity between two months was even greater (looking only at wet months preceded by dry ones).  The greatest difference occurred in  Sept-Oct 2005, when October had 16.73", which was 16.25" more than September's bone-dry 0.48". 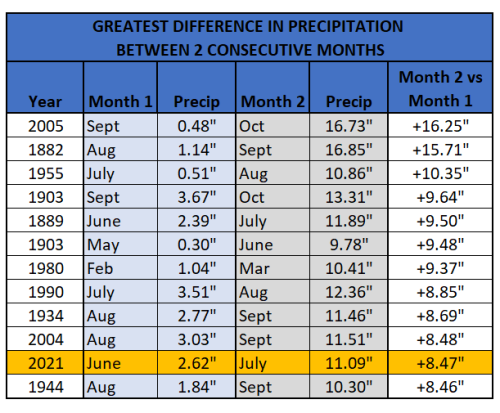 Finally, after suffering through sweltering heat, and a nighttime thunderstorm on the last day of June, the last day of July couldn't have been more different, as skies were clear and temperatures on the cool side (high/low of 77°/60°).  While 6/30's high of 98° (14 degrees above average) was the hottest reading on that date since 1964, 7/31's low of 60° (ten degrees below average) was the chilliest since 1956. 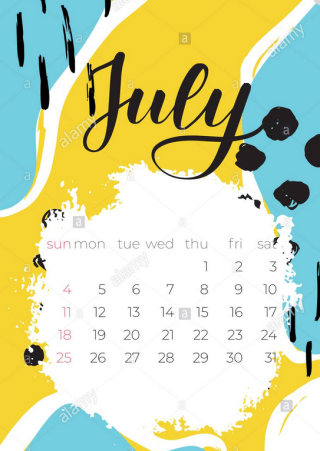 Here are other July recaps:

Also July 3 was the first time since 2005 that a July day had an average temperature under 65 degrees.

this was actually the fourteenth rainiest month overall and not the fifteenth. April 1983's fourteen inches of precipitation doesn't count and shouldn't count cause the rain gauge was on the fritz for at least a fraction of the year, therefore, invalidating 1983's precipitation totals.