September 2021 Weather Recap: A Record-Setting 3rd Month in a Row with 10+ Inches of Rain 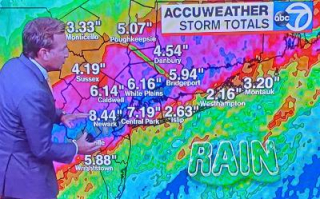 September 2021 will long be remembered for the torrential rain that fell the night of 9/1, submerging streets, highways, subway tunnels and residences.  Nearly 50 deaths in the metro area were attributed to the storm (13 of them were in NYC).  This unprecedented deluge was produced by the remnants of hurricane Ida pushing up against a mass of cool air.  Between 5 PM and 1 AM, a little more than seven inches of rain poured down (with three inches falling between 9-10 PM).

Although heavy rain had been predicted, its intensity in such a brief period of time took residents by surprise.  (And although hurricane Henri, two weeks earlier, produced an inch more of rain than Ida, it fell over the course of 48 hours). 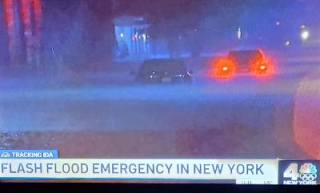 The rest of the month had slightly below average rainfall, but just enough to bring September's total to 10.03".  This was the most rain to fall in September since 2004, and it became the sixth rainiest September on record.  It followed the fourth wettest August (10.32"), and third wettest July (11.09").  Never before had Central Park had three months in a row in which each month had more than ten inches of rain.

Looking at temperatures, September was 1.1 degrees milder than average, and was the 26th mildest September (tied with four other years).  However, it ranked 13th for mildest average low, and 55th for warmest high.  12 days in a row (Sept. 12-23) had above average temperatures, a streak of days that was four degrees above average.  The rest of the month was one degree cooler than average.

Finally, the month was also characterized by a narrow range in its temperature extremes.  Typically, September's chilliest reading is around 50°, the hottest around 90°, but this September it ranged from 54° (on 9/29) to 85° (on 9/15).  Only two other Septembers have had a range that was smaller.  (The greatest range in temperatures in September was 55 degrees in 1929, ranging from 44° to 99°.) 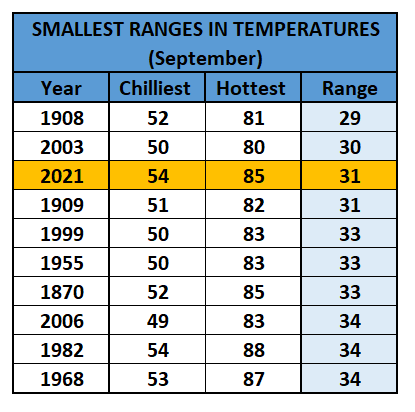 During Hurricane Ida, a vicious tornado outbreak hit south of New York. My sister moved out of southern New Jersey to Kansas in late July, so she managed to avoid the worst tornado in the outbreak. An EF3 wedge tornado brought havoc on the county where she lived. While New York was drenched with seven inches of rain, it was spared from any tornadoes.

One thing I was curious about and had hoped to see mentioned in this recap: how did this Summer stack up against the rainiest Summers in NYC history? With the 3rd, 4th, and 6thd rainiest July, August and September I would assume it would be up near the top.

Thanks for the reply. I was wondering though, unless I'm reading it incorrectly something about the math doesn't seem to add up. The recap states there was 10.32" 0f rain in August, 11.09" in July and 7.13" on 9/1, which would add up to over 28" all on it's own, without even counting the end of June or the rest of September up til the 21st. And yet in your reply you say this Summer only had 24.03" of rain measured, how do you account for the seeming discrepancy?

Ok, I was able to answer my own question by Googling, I now see that meteorological Summer is counted from the beginning of June through the end of August, pardon my ignorance. I'm still curious how this past astronomical Summer ranked in NYC history as far as rain totals.

Astronomical summer 2021 ranks as the rainiest on record, with nearly two inches more rain than 2011, which is ranked second.

Newark had more rain on Sep. 1 of this year alone than in all but three individual September calendar months. this was also Newark’s wettest September ever (after having its tenth wettest August and third wettest July), with 10.50” measured. its previous wettest September was 10.28” in 1944.

The information in the link below explains why 2021 was an exceptionally wet year in New York City.