September 2021 Weather Recap: A Record-Setting 3rd Month in a Row with 10+ Inches of Rain
Days With Temperatures Stuck in the 60s 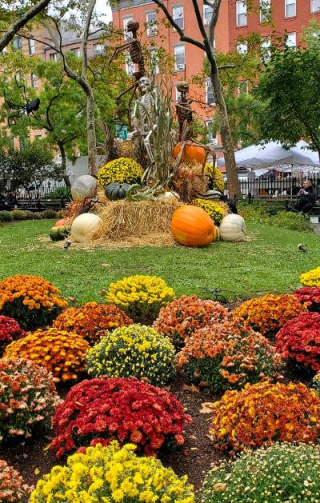 After unprecedented rainfall in July, August, and September (each month had more than ten inches), it appeared a respite was in store during October, as the first half of the month was the driest since Oct. 2000, with just 0.15" of rain measured.  However, these dry conditions came to an abrupt end in the last week of the month, as 4.71" was measured - the wettest last week of October on record (and eight of the last nine days had measurable rainfall).  Much of the week's rain was produced by a nor'easter on the 25th-26th that dumped 3.69" of rain. 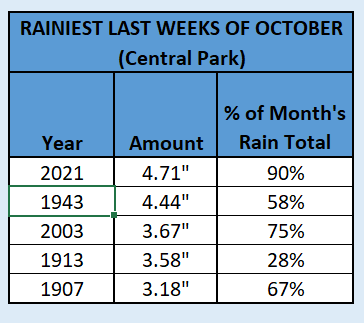 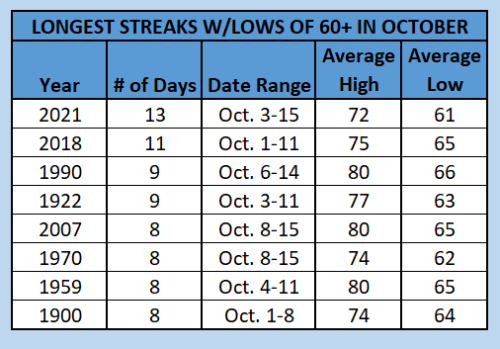 In an oddity, there were six days with temperatures stuck in the 60s - the most on record for any month.  They occurred in three pairs, and were concentrated in the nine-day period between Oct. 3-11.  This narrow temperature range was largely due to persistent overcast skies.

The season's first low chillier than 50° was reported on 10/18, which was the second latest day for this occurrence (latest is 10/20).  Additionally, the month's chilliest reading of 47° (reported on three days), was the mildest chilliest reading on record for October (on average, the coldest reading in October is in the upper thirties).

Although October had half as much rain as July, August, and September, the sky index reported much cloudier conditions than the summer months. October’s cloud cover was at 5.4 (on a scale of 10); a normal month’s cloud cover averages a scale of 3.5-4.5. The summer months at least had sunny skies outside of the heavy rainstorms, but in early October a bank of low clouds, some below 2,000 feet, moved in from the ocean. The layer of clouds was responsible for the warm nighttime lows in the low 60s (cloudy autumn nights prevent warm air from being released into the atmosphere as opposed to clear nights allowing Arctic air in). Because of the clouds and varying humidity, this October did not feel too warm or sticky to me, and only three of the warmest days (3, 14, 15) felt summer like. October 2018’s warm stretch under partly sunny skies was much more oppressive with a couple of severe thunderstorms to boot. Finally, we have had two Octobers in a row that failed to reach 80 degrees, after October 2019 had a day with 93 degrees.

the Octobers of 2017 and 2021 were very similar. both years rank as one of the warmest Octobers. both Octobers were bone dry in the first three weeks and had a three inch rain storm somewhere in the fourth week.

this was the third October in a row with at least five inches of rain. when was the last time there was an October streak this long of this kind?

Since there were five years with a warmer average temperature than Oct. 2021, it ranked sixth. Going to two decimal places, you’ll find the tie between 1947 and 2007 is broken, as Oct. 1947’s average temperature was 63.63 degrees, while Oct. 2007’s was 63.61 degrees. However, even if these two years had the exact same temperature, the two years are counted as separate positions when ranking the years behind it. The way the ranking charts are shown on the NWS site is not how I was taught to do ranks.

This current 3-year streak is the longest one in October. This surprised me because five inches isn't a particularly high amount.

This was the 12th October in a row to be above average. However, 2022 will likely become the first October in 13 years to have a below average mean temeprature.