December 2021 was the third mildest on record (behind 2015 and 2001, and 0.1 degree ahead of 1984), and tied for fourteenth driest.  At 4.7 degrees above average, it was the most above average month of 2021 (passing October, which was 4.1 above average).  Although it ranked third for mean temperature (average of high/low), the month had the second mildest average low, and was tied for seventh mildest average high.

Seven days had mean temperatures that were 10+ degrees above average, and eight days had highs of 55° or milder (half of these days were in the 60s).  The mildest reading was 66° on 12/11, which was a record for the date.  Two extended periods of mild temperatures were largely responsible for the month being so mild, as Dec. 11-18 was 11 degrees above average (high/low of 56°/44°), and the last week of December was 8 degrees milder than average (48°/40°).  This was just the seventh December to have no temperatures of 32° or colder in the last seven days of the month.

Like November, December was quite dry, with just 1.39" of precipitation  measured.  Combined, these two months became Central Park's driest Nov.-Dec. on record.  Ironically, this dry combo occurred in one of the ten wettest years on record.  By contrast, the nine driest November-Decembers behind 2021 had about twenty inches less annual precipitation than 2021. 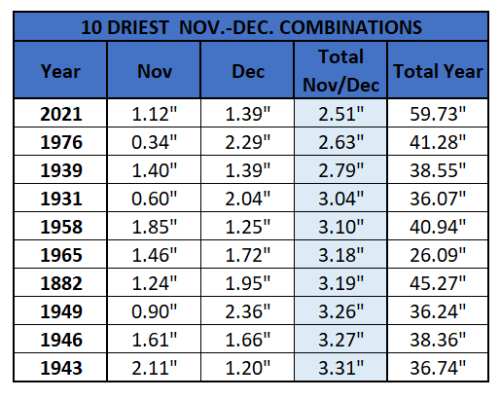 December had just 0.2" of snow, which occurred in the pre-dawn hours of 12/24.  However, meager snowfall in December isn't uncommon, as smaller amounts (or none at all) have occurred in five Decembers  since 2001, and nine since 1994 (once every three years).

Finally, the month, and year, ended on a mild note as the temperature at the stroke of midnight was 51° (after a high of 55°).  This was the mildest reading during the ball drop at Times Square since 2004 (and the fifth mildest ball-drop reading on record). 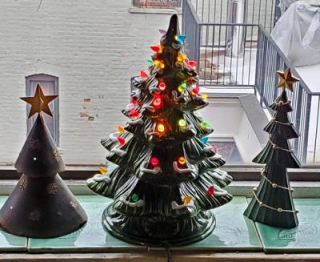 Dec. 2001 was a case of cold weather at the end of the month balancing very mild temperatures during the first week. By contrast, temperatures in December 2021 didn't fluctuate to the same degree and still managed to have an average temperature close to 2001's .