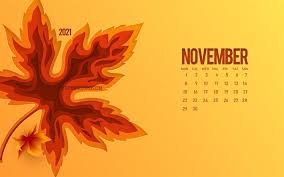 With just 1.12" of rain, November 2021 was the driest November since 1976 (the driest November on record).  The month was also 1.8 degrees chillier than average, making it the most below average month of the year (February and July were  1.7  and 1.5 degrees below average, respectively).  This November was significantly chillier than last November (the mildest on record), as it was 6.8 degrees colder - the biggest temperature drop from the previous November since Nov. 2012.  Only eight other Novembers have had a bigger drop in average temperature compared to the November immediately preceding it. 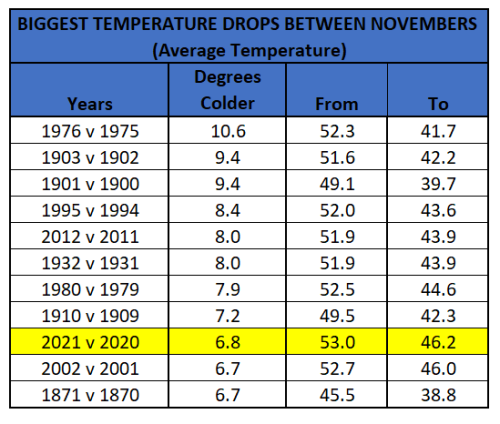 Despite its big difference from last November, Nov. 2021 was far from the ranks of the coldest, as it tied for 80th chilliest.  (Fun Fact: Every November between 1869-1894 was colder than Nov. 2021.)  Still, it had 14 days that were five or more degrees below average.

The month's warmest reading was 69° on 11/18, followed six days later by the coldest reading (30°).  Although this was the latest date for a temperature this mild in six years, it was the first time since 2014 that the warmest November reading failed to be in the 70s.  Of note is that this warmest reading didn't occur during the 6-day period Nov. 8-13, which was six degrees milder than average.

Most of the month's 1.12" of rain fell during two rain events on consecutive days:  0.48" on 11/12, and 0.33" on 11/13.  On the 13th, an uncharacteristic precipitation type for November, hail, fell for a few minutes during a quick-moving thunderstorm.  Another type of frozen precipitation, snow flurries, was reported on the last three days of the month  - but there was no accumulation in Central Park (Newark Airport reported 0.1" on the 28th).

Here are recaps of previous Novembers:

The hail in the thunderstorm on November 13, 2021, was incorrectly classified by the NWS as a trace of snow, much like the severe thunderstorm with hail on May 29, 1995 (thanks to Harry’s comment on the May 9 post). If the real snow flurries at the end of the month did not occur, November 2021 would have been a unique case in Central Park weather recording in which the only “trace of snow” of the month was actually hail produced by a thunderstorm. (Two years earlier on December 30, 2019, I was in CT and witnessed an unstable air mass produce a severe thunderstorm that had frequent thunder and cloud-to-ground lightning, hail, ice, snow, and rain all at the same time!)

Henry, apparently it is now normal procedure for the NWS to report hail as a trace of snow. I completely disagree with them (as I'm sure you do) as it can produce things like a trace of snow being reported in summer (which has happened at Newark Airport). The "F=6" monthly reports from the NWS now list it as "snow, hail, ice pellets".

And I assume you mean "the only trace of the month being hail" in a winter month (or at least a month that has had snow on a semi-regular basis) since otherwise May, 1995 as you noted would be a month where the only trace of snow is hail. But considering that a real trace of snow has fallen in May in NYC only in 1977 and 2020, that would be ridiculous

They way they justify this is to say that it will not count for things like latest/earliest in the season trace, etc. but I think it's still wrong.