After a December that was the third mildest on record, the first two days of January 2022 saw a continuation of these mild conditions, with highs of 56° and 59°.  Then the jet stream shifted, winter-like conditions arrived, and the month became the coldest January since 2015.  At 3.4 degrees colder than average, it was the most below average of any month in more than two years, since November 2019 (which was 4.1 degrees below average).  Subtracting the first two days of the month, which were 16 degrees milder than average, the rest of January was 4.5 degrees below average.

Besides cold temperatures, snowfall was also above average, with 15.3" measured (after just 0.2" fell in December); most of it was produced by two snowstorms, as 5.8" fell on Jan. 7, and 8.3" was measured on Jan. 28-29.  This was the snowiest January since 2016 (which is the second snowiest January), and tied for 20th snowiest January overall.  Its snowfall was greater than the combined amount of the three preceding Januarys (5.5"). 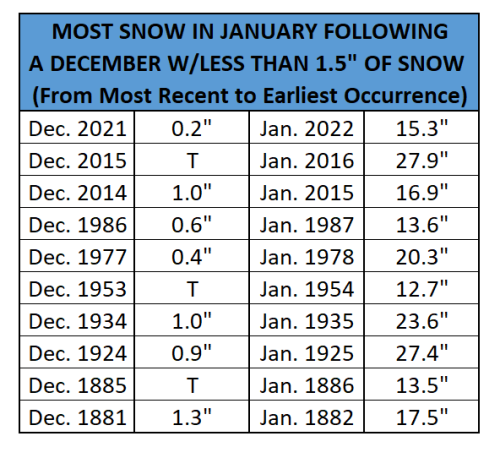 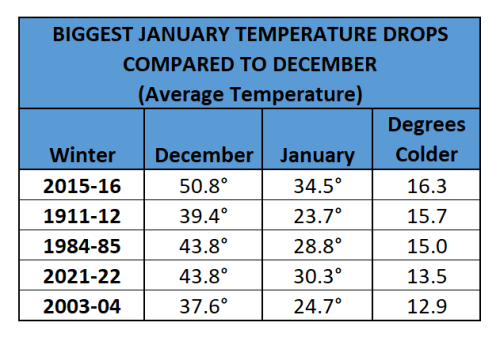 Here are previous January recaps since 2014 (there was no recap published for Jan. 2016).

this was the first January since 2004, the fifth January of the past one hundred years and only the ninth January overall, in which the last six days of the month all had a high of 32° or colder.

Thanks, Gerry, I think I fixed one of the links, but a few others are still giving me trouble.