This was the last day of a six-day cold wave that had temperatures that were 18 degrees below average (high/low of 26°/14°).  Three of the days had morning lows of 11°.  However, despite the cold there was no measurable snowfall.

Snow that began late in the afternoon yesterday (accumulating 3.6") continued until shortly after 12:00 noon today, totaling 15.2".  Blizzard conditions prevailed during much of the storm, with snow falling most furiously between the hours of 2-7 AM, when nearly seven inches piled up.  A number of other snowstorms in December have had greater accumulations, but this storm produced the largest so early in the season.  (A year earlier there was another major December snowstorm that dumped 13.7" on 12/21-22.)  The snow was also accompanied by wind and Arctic cold as the temperature fell throughout the day, dropping from 21° to 9° by midnight.  At the time this was the fourth largest December snowstorm (now ranked fifth). 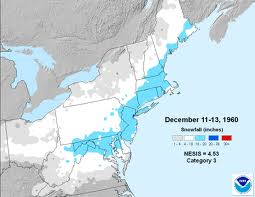 Three inches of snow fell this morning, the first snowfall of the winter (and eight days after a record high of 72°).  Less snow would fall in the next eight weeks than fell today.  This was also the first day of the season with a maximum temperature of 32° or colder (high/low of 31°/21°).

This morning's low of 5°, a record for the date, was the coldest reading so early in December in more than a hundred years (since a low of +3° back on Dec. 10, 1876).  And it tied Jan. 14 and 15 as the coldest reading of the year.  This extremely cold day (the high was only 20°) was part of a prolonged 10-day cold snap in which temperatures averaged 10 degrees below average.  Six of the days had high temperatures below freezing.

Today was unsettled, but it was nothing like yesterday's nasty conditions delivered by the nor'easter that barreled through the area.  Periods of wet snow fell thru mid-afternoon, accumulating a slushy 0.4", the first snowfall of the winter, and the only snow of the month.  Meanwhile, much of Massachusetts was buried by 20"-30" of snow.

With a high/low of 31°/24°, today was the first day of the winter completely below freezing.  And it was the only such day in December.